“We believe that by learning and understanding the problem, we can discuss opinions and solutions in a proactive way. By improving the services offered to the community, everyone in it can benefit. The community is rich with people, and everyone is deserving of a quality life.”

Morgantown, W. Va. is home to a diverse array of neighborhoods, businesses and people; however, one community of residents is often neglected, overlooked and dehumanized. The unsheltered population or people experiencing houselessness are often misunderstood and subject to scorn. To turn the tide, our mission was to work alongside the Morgantown Special Committee on Unsheltered Homelessness to create an open and honest dialogue about housing concerns in Morgantown, with the hopes of creating a more empathetic, understanding and welcoming community for all of our neighbors.

Through secondary research, as well as ethnographic research and expert interviews, we found several factors that contribute to the unwelcoming and often unsafe realities for individuals experiencing houselessness.  The factors include:

For this campaign, we decided to focus on city council members, police officers and individuals who live in the Morgantown area who may have some influence over their communities (i.e. neighborhood association presidents). These audience segments were targeted because of their proximity to the unsheltered community and their ability to impact positive change in the way the unsheltered community in Morgantown is viewed.

We wanted our campaign to send the message that people experiencing houselessness were not a nuisance, but neighbors. They are not “homeless” their home is here in Morgantown and they are valuable community members worthy of respect. To this end, we used this message throughout our multifaceted education and awareness campaign.

“Neighborhoods have people, communities have neighbors.”

The Exhibit: Neighbors Beyond Neighborhoods

To better understand our neighbor’s passions we launched the Neighbors Beyond Neighborhoods art exhibit. The exhibit recognized our neighbors’ passion and creativity through works including original live music, photography, paintings, poems and ceramics of, about and by people experiencing houselessness.

The exhibit was open to the public over the course of three weekends, with an opening reception that took place during a downtown street fair type event and an invite-only closing reception. To get our target audience involved we reached out to community leaders, business owners, city council members and police officers and encouraged them to join us in highlighting the unsheltered community’s work.

The exhibit provided a safe space for community members to share their thoughts and opened room for dialogue. During the event, visitors were asked to share their reflections on the art exhibit. These written testimonials shared reflections on what it means to be a neighbor, the shared sense of community in Morgantown, the inspiration gleaned from the art and a general sense of compassion.

Highlighting the fact that a neighbor isn’t just someone who has a physical address, we also created window and yard signs to let people show their support for their community members. Signs were given to event donors, local businesses, community groups, and elected leaders who displayed the signs in front of their homes and business.

To elevate the use of person-first language and coverage, a media language guide illustrating examples of proper ways to report on houselessness was developed and distributed to local news agencies. 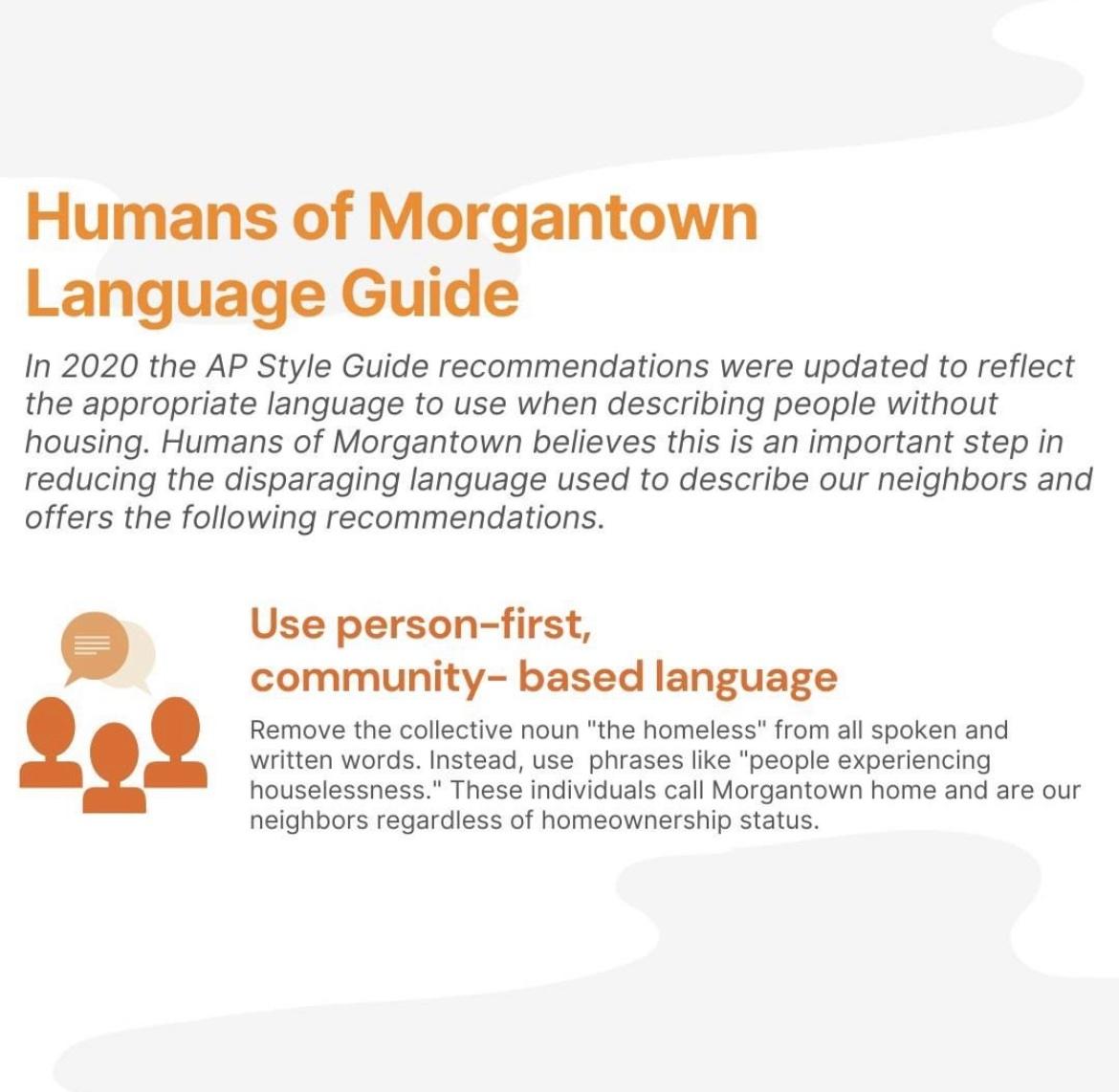 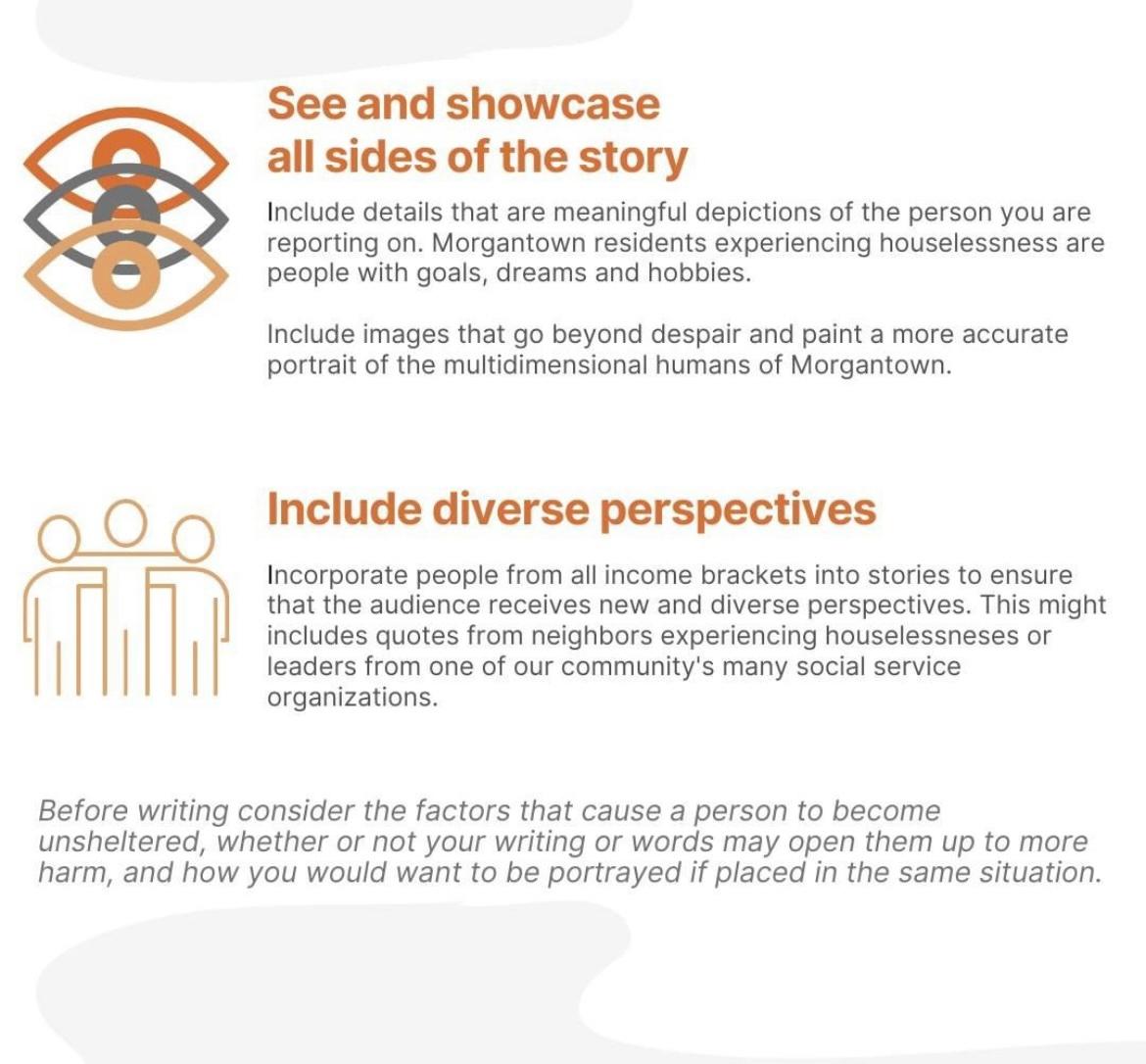 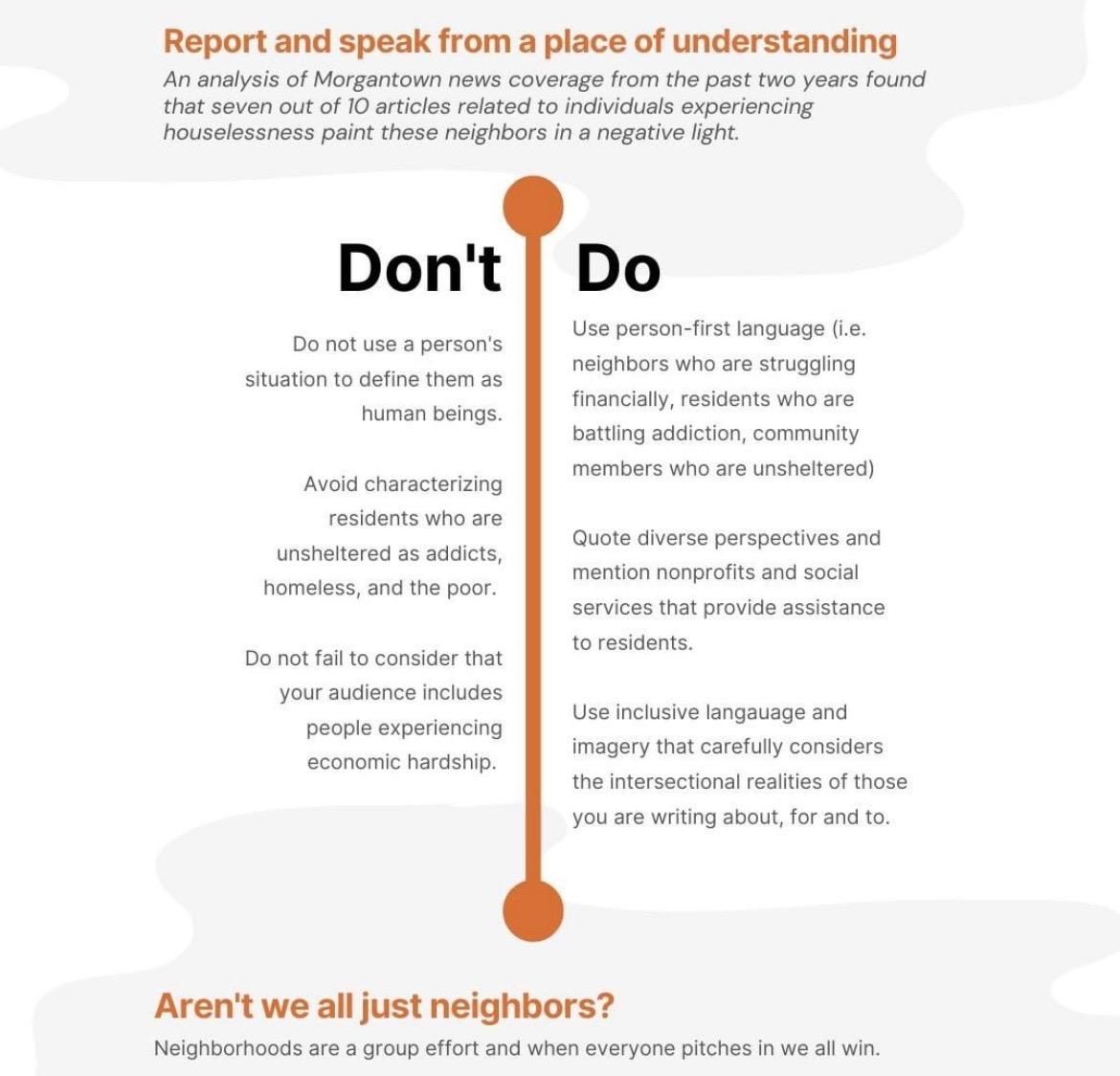 Four pop-up banners created in the fall of 2021 were also used as a way to break misconceptions and increase awareness.  The banners, displayed in local businesses and churches, include quotes from Morgantown residents, both sheltered and unsheltered, with a question asking viewers to identify which residents were housed and which were not. In most cases, viewers are not able to do so, reinforcing the idea that people experiencing houselessness are not much different than those who are housed.

Humans of Morgantown (HoM) Facebook and Instagram pages, launched in the fall of 2021, were used to introduce followers to different people in Morgantown while also promoting the exhibit. Specifically, Instagram and Facebook highlighted stories of the unsheltered population along with photos of people and fun facts about them. The stories demonstrated our similarities while focusing on the humanization of our neighbors who are unsheltered.

The HoM website was used to provide information about the Neighbors Beyond Neighborhoods art exhibit, services for those experiencing houselessness, ways to get involved, the campaign’s message and the steps for reserving the pop-up exhibit. The HoM website is meant to keep our community informed, reach a wider audience digitally and provide additional ways to learn.

As Seen in Neighbors Beyond Neighborhood

One of the most successful results from this campaign was the elimination of the word “homeless” from any of the news coverage talking about the Humans of Morgantown campaign. In addition to this Humans of Morgantown also saw an increase in social media engagement, as well as funds raised for local charities benefiting people experiencing houselessness.